We find the right people for the job!

Our client shortlisted applicants have a 95% success rate. 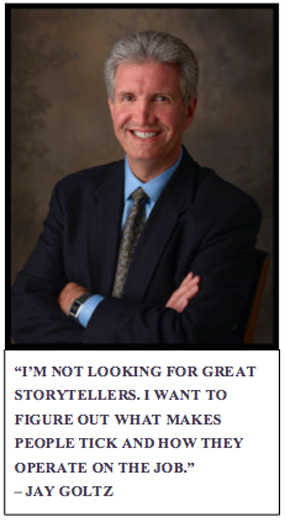 In the following Q&A, small business expert Jay Goltz draws from his experience as an entrepreneur to discuss the lessons he’s learned – often the hard way – about what it really takes to hire and retain the best people to run a successful business (or, in his case, five).

In your book, The Street-Smart Entrepreneur, you talk about lessons you learned the hard way. What’s your most memorable lesson in terms of hiring?

I once interviewed a sales manager at a retail shop that had five salespeople, and I asked her, “How many people did you go through before hiring those five great salespeople?” And she said, “Just five.” I literally laughed and said, “Either you have much lower standards than I do, or you’re a hiring guru.” I hired her, and she turned out to be a hiring guru. She moved away about 10 years ago, but most of the people she hired while she was here are still with me.

The lesson here is that part of hiring well comes down to who’s doing the interviewing. There are some people who can hit a fastball and some people who can’t. Likewise, there are some people who are great at interviewing and some who aren’t. There’s some element of natural talent there. And that realization has had a profound impact on my company. It used to be, when I hired, only 30 or 40 percent of the people I hired worked out great, and now it’s up to 80 percent. And that’s because we’re much better at hiring.

Reference checks are often an underrated virtue of the hiring process. What’s your stance on that?

I totally agree with that. Whenever I hear about people who are having problems with an employee, I always ask them, “Tell me how you hired this person.” No one has ever said to me, “I put an ad out, I interviewed a lot of people, I did some really thorough questions, and then I really checked references.” It’s always, “Yeah, I didn’t check references.” So people are getting what they deserve, I’m sorry to say.

The other thing is, when you’re doing reference checks, you have to read between the lines. I had a call in about a designer one time, and the reference just blurted out, “Oh, she’s really talented.” After interviewing [the candidate] some more, I realized she was really neurotic, but the woman I used as a reference clearly didn’t want to say that. All of a sudden, it made sense why the reference didn’t say, “She’s great. You should hire her.” When someone’s a great employee, people say things like, “Oh, you’re really lucky she applied. You should hire her right now. She’s a wonderful employee. I really miss her.” Is reference-checking 100 percent reliable? No. Even if you do everything right, you’ll still probably only have a 90 percent chance of them working out – maybe 80. But if you don’t do everything right, those chances go down to 30, 40, or 50 percent.

Aside from failing to check references, what are some of the biggest mistakes people make in the hiring process?

They don’t ask the right questions in the interview. They don’t drill into the reasons people left their previous jobs. I’ll ask them, “Did you quit or get fired?” And a lot of times, they’ll say, “Well, it was sort of a combination of both.” And I go, “Oh, really? So you quit, and your boss said, ‘That’s such a coincidence – I was just about to fire you.’” To me, that sounds like bull.

Other mistakes people make include asking bad questions, not listening to the answer, hearing what you want to hear, or not asking enough follow-up questions. I follow up with stuff, because the fact of the matter is, if someone’s looking for a job, (unless they’re straight out of school) there’s a story to tell. People change jobs for a reason. One of my favorite questions to ask is, “Tell me about the most difficult customer situation you’ve had to deal with, and how you dealt with it?” Those [behavioral questions] are always telling. I always say, “Past performance is the best indicator of future performance.” If someone’s had six jobs in the last two years, they’re probably not going to be with you too long. Questions like “Who’s your hero?” might work for some people, but I’m not looking for a great storyteller. I really want to figure out what makes them tick and how they operate on the job.

What specific traits do you look for when you hire?

I have four things I look for, which we call the BATH test. B means I want someone who "buys" into the concept. In our case, the concept is that we’re a design company, we’re a customer service-driven business, we do what we can to take care of the customer, and we treat people well. I look for people who buy the concept of what we do and are into it. A means they’re "able". I want to know from past jobs that they have the ability and skills to do this, not just someone who says, “I’d like to do that. I’d probably be good at it.” The chances of that being true could be as low as 25 percent (when it’s a highly skilled position) – and it’s not that they’re not lying, they just don’t know. I want someone who has a proven track record. T means they’re "team players". I want someone who’s going to tell me what’s on their mind, who can tell me right to my face, “Jay, you’re driving me nuts. What can we do about this?” And finally, H is for "hungry". I want someone who’s hungry, who really wants to do this.

What do you do to orient new hires into the company?

After they’ve been here a month or two, we have an indoctrination where we tell them things like the whole mission of the company, where we came from, the history, as well as more tangible stuff such as if they have a problem, what they should do about it, etc. And we purposely don’t do it on the first day. We wait till they get a little used to the place, so that at the end of it, we can go, “Okay, do you think I’m lying, from what you’ve seen?” So at least one time, they’re sitting there with the big boss, and I’m telling them, “Look, I’m telling you right now: stop me in the hall, leave me a note, give me a call. If there’s something I’m telling you that really isn’t the case here, please tell me!” It lets people know we believe what we say, and if they’re not happy here, what they can do about it.

What is your stance on exit interviews? We do them. Our HR department conducts them, but, personally, I’ve never gotten any huge revelations out of them. That’s not to say that exit interviews are worthless, but if you’re running a good business where there’s open communication, you shouldn’t need exit interviews. If you’re learning something new, that’s the symptom of a problem. You shouldn’t be learning anything new in an exit interview. There’s a value in it, but they’re like seatbelts: Most of the time they’re useless, but once in a while, it might really make a difference.

Jay Goltz is a nationally recognized author and speaker on the topic of running a successful small business. Jay has been featured in various media, including Fox Business News, Inc. Magazine and Bill Clinton’s bestseller, Giving, and is currently a business blogger for NYTimes.com. Source: The Hire Site Blog